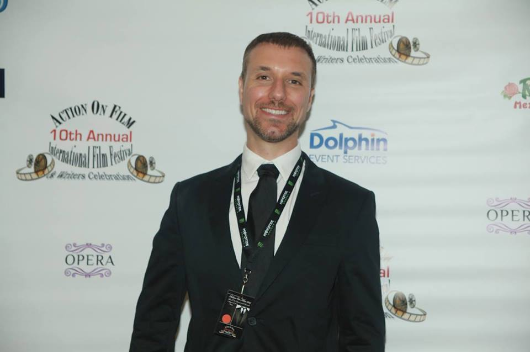 Over the years, Eric Casaccio has been involved in several different areas of the entertainment industry.  He got his start performing in Boston Regional Theatre Productions and independent films. During that time, Casaccio worked for Boston Casting recruiting talent for commercials, industrials, theater productions, and independent films while taking crew positions on local movies.

In January of 1997, Eric moved to Los Angeles to pursue acting and writing and subsequently wrote his first feature screenplay "David's Walls".  After completing several drafts, he became determined to bring this creation to life.  Shortly thereafter, Eric became involved in production working on features, commercials and music videos.  Combining his experiences in production and casting, he produced a five-minute experimental music video for "David's Walls" offering viewers a brief symbolic vision of the story with abstract glimpses of the main characters.  "David's Walls" screened in several festivals around the country.

An accomplishment jump starting Casaccio's other creative successes is "Psychic Glitter", an onstage charity event production responsible for raising just under $2,000.00 for The Trevor Project honoring the memory of Lawrence King, a teenager shot and killed in school for his sexual orientation and gender expression.  Eric wrote, produced, co-directed and even played a feature length lead role while spreading awareness for an unforgettable tragedy.

In addition to studying abroad with the London Theatre Program, Eric received his Bachelors Degree from Roger Williams University graduating with honors. He has studied acting at the Michael Chekhov Connection, appeared in many award winning short films and is a member of SAG/AFTRA.

"Twin Flames" will be workshopped sometime in 2016.

"Life is about living in the moment, and the moment is all you have."

Steven Tylor O'Connor grew up in Scottsdale and Cave Creek, Arizona. After graduating student body president of his high school, he moved to New York City to attend an on-camera acting conservatory.  After graduating from the New York Conservatory of Dramatic Arts: The School of Film and Television, Steven started working in the city as an actor and began to create his own projects.

Steven has interned at CBS/Paramount Pictures in the casting office and worked for NBC Universal covering all new sripted primetime programming from 2009 to 2012.  During that time, Steven wrote, directed and produced a play called "Carefree, A.A." and wrote, directed and produced the short films "A Fairy Tale" and "Welcome to New York".  He even played the lead role in "A Fairy Tale".

In 2011, Steven decided to give Los Angeles a try and worked in casting on the pilot "The Soul Man" for TV Land and and "Hot in Cleveland" and "Returned at 35" in the offices of Brett Greenstein and Collin Daniel.  In 2012, Steven returned to New York to work for NBC Universal one last pilot season while shooting "Welcome to New York" and once again, returned to the City of Angels where he resides now.

Upon returning to Los Angeles, Steven worked in the casting office of Suzanne Goddard-Smythe on projects that include "Heathers: The Musical", "Live and Maddie", "Crash & Bernstein", "Shake It Up", Adan Devine's "House Party", "The Game". Meanwhile, Steven produced "Grind" a short musical film starring Anthony Rapp, Claire Coffee and Pasha Pelloise, "Daddy", an indie feature starring Gerald McCullouch, Dan Via and Jaime Cepero as well as "Narcissist" and other shorts "Carefree", and "If You Could Only Be You".

"I don't do it because I can; I can because I want to; I want to, because you said I couldn't'.